So maternity leave is officially over and I'm back at work (though since it's the Easter holidays I don't have to face the trauma of leaving my babies for another two weeks yet). It's so tough being a working mum - you really want to stay with your little ones every moment, despite all the trials and tribulations, but financially it would be tough and in some ways it's good for them to experience being away from mummy for a little while as it prepares them for the inevitability of separation when school starts.

This is something which is coming up way too soon, I will be a mess come September when J goes off to school in his uniform and I am not the person that he spends most of his day with any longer. A real watershed moment. He drew this little picture the other day - the first that really looks like something, and has started to come home from preschool talking about friends he has made and games he has played. He is really turning into his own little person, which is wonderful, but also bittersweet as he is growing further and further away from that tiny baby I brought home from the hospital. 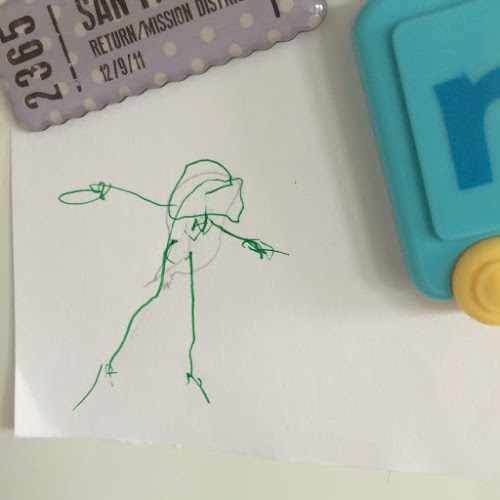 Anyway, I'm trying to half-heartedly sell the return to work to myself with the prospect of being able to buy yarn for projects without too much guilt. I may even treat myself to some Malabrigo Rios with my first proper pay-check. In the meantime, I've been undertaking what will probably be my last big knit before work begins, Breathing Space by Veera Valimaki. I'm knitting it as part of the Interpretations KAL on Ravelry, and there are some lovely and diverse examples of the garment as everyone puts their own spin on it with colour choice and adaptations. 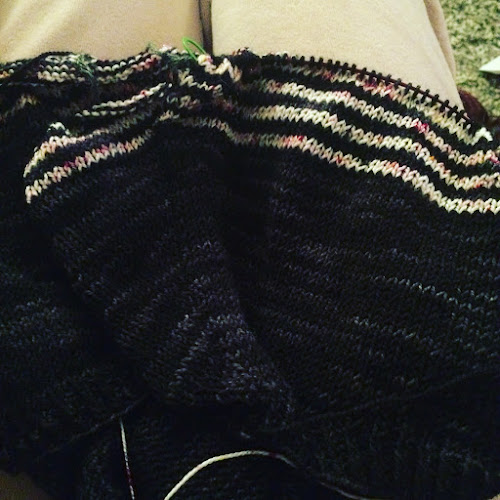 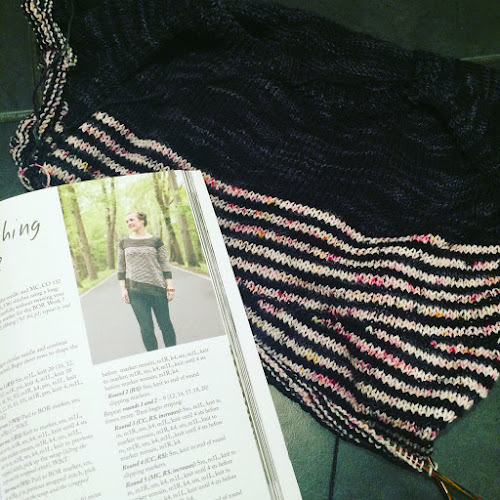 As always will Veera's patterns, it's so easy to follow and I love the interesting techniques - the short row stripes add interest and a touch of quirkiness to the project. I have been using Japanese short rows on all my projects that require them recently, as I find them neater, though if anyone can tell me a way to close the gap effectively after the short rows are finished and you go back to knitting in the round again I'd love to hear it - I'm always left with an ugly hole no matter what I try.

Posted with Blogsy
Posted by CloClo at 21:02

CloClo
I am a history teacher in a big secondary school in Coventry. I teach kids about executing royalty, trench warfare and how to make lovely tea-stained pieces of work to staple to the classroom walls! I live with my husband, baby son and three little cats. I am a naturally creative person and discovered scrapbooking mid 2006. I was amazed (and proud!) to win Best of British New Talent for 2007. I was even more amazed to become part of the Design Team for Scrapbook Inspirations magazine in 2009. These days I am also doing a lot of knitting - easier to pick up and put down when you are busy!

Where I go shopping...

Places I visit for inspiration...

What I've been reading lately...